National Poetry Day in association with Frances Lincoln Children’s Books and Amnesty International UK ran a special competition this year asking children to write a poem inspired by the theme of Freedom, and in particular John Lennon’s song Imagine, which is now the basis for a beautiful picture book, illustrated by Jean Jullien and with a forward by Yoko Ono.

Entries poured in from schools across the UK with over 700 poems submitted. These have now been read by National Poetry Day ambassadors and the winners announced today: they are ten-year old Molly Suggitt a pupil at Appleton Academy, Bradford, and eight-year old Basti Cook who attends Chilmark and Fonthill Bishop Primary School in Salisbury. 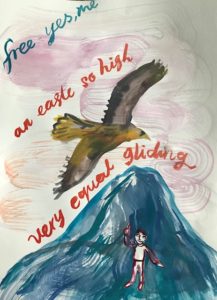 ‘The winning poems planted direct and unmistakeable images in my mind, as well as showing original and imaginative uses of language’, said Herxheimer, whose book Velkom to Inklandt (Short Books) is one of the bestselling poetry books for Christmas. She adds: ‘Basti Cook made me see the eagle in the poem. Somehow the line ‘very equal gliding’, rhymed so nearly with eagle made me feel I was flying too – symmetrical and aligned, with a vast wingspan, the rhythm of the whole poem had the dipping and soaring of flight.

‘Molly Suggitt’s poem which seemed to be about Noah’s Ark, at the same time conjured images of more contemporary waters, dangerous journeys where a ‘so kind bird’ brings ‘evidence of safety’.
Again there was a lovely sense of scale here, as in these lines: ‘In the treacherous winds/And that one little bird,/ Stopped your heart from sinking.’ 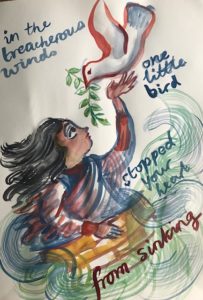 ‘Both the winning poets chose their words with care and from their own personal imaginations – these poems were thoughtful and spare, thank you for writing them Molly and Basti, keep looking at the world and writing about what you see and feel!’

Molly, as overall winner, has also won a visit to her school by National Poetry Day Ambassador Matt Goodfellow. Andrea Reece, National Poetry Day manager said, ‘We were delighted to work with Frances Lincoln Children’s Books and Amnesty International UK on this competition and it was wonderful to see the children letting their imaginations run free inspired by John Lennon’s immortal words. Matt is looking forward to his visit to Appleton Academy very much; National Poetry Day is all about discovering and sharing poetry, and we know that hearing poets and working with them is one of the best ways to inspire children.’

Katherine Josselyn of Quarto Frances Lincoln Children’s Books said: ‘All of the poems were fantastically imaginative. The budding poets had thought hard and creatively about the theme of Freedom and how they imagine peace, friendship and unity in their world today, just like the little bird does in the book version of Imagine. We were stunned by the high standard of the entries and look forward to reading more of their poems in the future!’
For further information contact: Annabel Robinson, FMcM Associates t: 020 7405 7422 e: annabelr@fmcm.co.uk

Imagine by Molly Suggitt
Imagine Noah’s Ark,
When the floods came.
Where the so kind bird,
Brought evidence of safety
To the boat carrying two by twos.

Imagine you were there,
In the treacherous winds.
And that one little bird,
Stopped your heart from sinking.

Freedom by Basti Cook
Free
Yes,
Me!
Fly
Fly
Up in the sky
Up in the sky like an eagle so high
Gliding on the sunlit horizon
Slow steady sliding
Very equal gliding
Over the snow capped mountains
Flying over Everest
Passing hungry bears
Eating little mice
Sighting loads of evergreens
Seeing humans ski.
Freedom
Yes,
For me
What else can I seek?
Oh yes,
Foxes,
Hares
And
Bears
Eyeing herds of icicles
Leaving pale white mountains.

National Poetry Day is a mass participation campaign that inspires people to enjoy, discover and share poems. The celebrations fell this year on 28 September. In 2018 National Poetry Day will take place on 4th October and the theme is Change.

National Poetry Day was founded in 1994 by William Sieghart and has engaged millions of people across the country reading, writing and listening to poetry. From 1999 onwards, National Poetry Day has been loosely themed: the theme meant to kickstart inspiration rather than be prescriptive.

National Poetry Day is co-ordinated by Forward Arts Foundation and enjoys the support of the BBC, Arts Council England, the Royal Mail and leading literary and cultural organisations, alongside booksellers, publishers, libraries and schools. The campaign’s reach in 2018 exceeded 520 million.