To many it is a familiar scenario. Matthew Arnold Bracy Smith’s The Disrobing (Despoiling) of Christ (after El Greco) vividly captures the moment of Jesus’ trial by the Pharisees, just moments before he is stripped and tortured. As the title suggests, Smith’s style and composition of the painting also pays homage to El Greco’s famous The Disrobing of Christ (1577-79) created for the Cathedral of Toledo, where it still hangs. 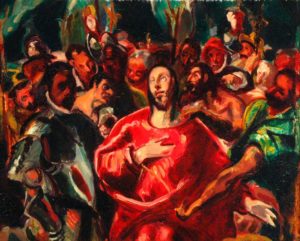 However, for 22-year old Londoner Amani Saeed, the scene featuring a serene Christ amid a vibrantly-coloured crowd of onlookers is reminiscent of a nightclub. To her eye, the dark background and brightly lit faces and clothing of the people surrounding Christ suggests a packed dancefloor. Amani has cleverly reimagined the setting and used poetry to tell a new story about a painting in our public collection.

Amani’s poem, Jesus Christ Goes Clubbing transports the viewer and the listener from a chaotic and murderous impromptu court in Jerusalem to a London club: “I met Jesus at the disco, He was on the dancefloor getting down with the knight doing the ‘Robot’, red robes brushing chainmail, As he walked off to get some air he flicked the cups of the women drinking water at the bar and they shrieked in delight at the Pinot Noir gracing their lips…” 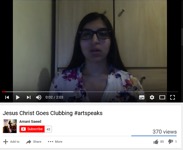 Explaining why she chose Matthew Smith’s painting, Amani – who was brought up in New Jersey, USA but now balances a career as a Civil Servant in Westminster with being a spoken word artist – said: “I was scouring the Art UK website and came across ‘The Disrobing (Despoiling) of Christ (after El Greco)’. It’s rich in wild colours and very neon. I thought ‘Wow! This looks like Jesus in a disco. Initially it looks like a fun, joyful scene but then I saw the title and realised what happened next. That was quite a contrast from what I originally thought and so I wanted to write about that.”

Poets aged 13 to 24 from across the UK submitted their entries to the competition via YouTube, producing a variety of powerful poems covering contemporary themes but all inspired by a painting they’d found on artuk.org. All the entries can be found on Art UK’s YouTube channel.

Four leading, professional poets – Anthony Anaxagorou, Sabrina Mahfouz, Sophia Thakur and Jacob Sam-La Rose – took on the difficult task of choosing a winner from the high quality submissions, while members of the public also had their say by liking the videos on YouTube.

Amani receives a £500 cash prize, and will have a professionally filmed version of her reading ‘Jesus Christ Goes Clubbing’, funded by Art UK. This will be added to Art UK’s YouTube channel in time for National Poetry Day, on 28 September 2017.

Art UK Director, Andrew Ellis says: “We have been impressed by the quality of the entries to the competition, and are excited to see what the future holds for all the young poets who entered.”

Susannah Herbert, National Poetry Day Director, said: “When you put young poets next to Old Masters, you get rhythm, wit, urgency and excitement. The brilliant performers and writers who responded so strongly to this competition have brought the nation’s art collection closer to everyone who owns it. We at National Poetry Day are so pleased to partner with Art UK to show us the world through new voices, new words.”

I met Jesus at the disco

He was on the dance floor getting down with the knight doing the ‘Robot’, red robes brushing chainmail

In the bathroom he held back the guitarist’s hair as he puked in the corner cubicle, ignored the two pairs of feet in the stall next door cause he heard a scream from a girl in the smoking section and had bigger worries than two men’s consensual desires,

As he made his way outside he was offered a drag but tactfully declined the tiny fires burning the night air, saved the Marys from lecherous grabs, hailed them cabs home, ‘cause he could see the ill intentions of the men lurking

And then he saw me

He slipped through the crowd gracefully, breaking off bits of his fingers for the drunks to munch on and came to me, hunched by the wall, took my arm

And we rushed back inside, surrounded by sinners and he was one of us, scarlet robes rippling to the beat and the whole club hallelujah-d and we were shaking and vibrating with the spirit until a man in green seized his arm and shrieked

And the music stopped and people dropped their drinks and Jesus looked calm as we gathered around him, and he must have known what was about to happen and I’ll never know why I said nothing

And I’ll never know how he did it

How he told his face to remain serene, kept his gaze raised to the heavens, even with his arms crudely bound by the bouncer, even when surrounded by faces daubed and darkened with hate

How did he pray, how did he keep his hand splayed on his chest as they ripped his robes from him, did he feel like a woman? Did he regret? Did he know?

The world slowed and all I could see was that one still, the flash of vermillion and his skin burning like gold, the faces like flames unfolding around him, and the disco ball melting and suddenly the air was sweet, we breathed, we swirled around him like a vortex and he was looking up, fingers triumphantly flexed high, and he smiled.

Established in 2002, Art UK (previously known as the Public Catalogue Foundation) is a dynamic arts charity with a national and global reach. We are working to transform access to the UK’s publicly owned art collection, much of which is not on display. We do this through digitising artworks and creating exciting opportunities for public interaction with art both online and offline. Our website, www.artuk.org, is a free-to-access digital showcase for the UK’s public art collections and vital digital infrastructure for the UK’s cultural sector. Between 2003 and 2012 we digitised 212,000 oil paintings from 3,200 locations across the UK as part of our Oil Paintings digitisation project – a unique national achievement. Our multi award winning Masterpieces in Schools and Art Detective initiatives provide online and offline opportunities for learning and participation and contribute to collection knowledge. Since September 2016, watercolours, drawings and artworks in other media, already digitised, have started to be progressively added to Art UK. The Art UK Shop is being piloted with a public launch planned for October 2017. We are also just starting a 3-year project to make the UK the first country in the world to create a free-to-access online photographic showcase of its publicly owned sculpture. Supported by a £2.8 million National Lottery grant we are cataloguing the national sculpture collection. Around 170,000 sculptures – located inside galleries, museums and public buildings and outdoors in parks, streets and squares – will be displayed on the artuk.org website for enjoyment, learning and research. Go to https://artuk.org/participate/art-speaks-the-competition to find out more, follow us on Twitter, Facebook and Instagram @artukdotorg

National Poetry Day is an annual mass participation campaign that inspires people throughout the UK to enjoy, discover and share poems. The celebrations fall this year on 28 September 2017 and everyone is invited to join in, whether by sharing a line of poetry with friends, family and colleagues, attending an event or simply posting on social media with the hashtag #nationalpoetryday. National Poetry Day has been coordinated for 23 years by the charity Forward Arts Foundation: it enjoys the support of the BBC, Arts Council England, the Royal Mail and leading literary and cultural organisations, alongside booksellers, publishers, libraries and schools. In 2016, the campaign’s reach exceeded 520 million. Follow us on Twitter @poetrydayuk and www.facebook.com/PoetryDayUK/