When the tabors played their best,
Lamps above, and laughs below —
Love me sounded like a jest,
Fit for Yes or fit for No !

Call me false, or call me free —
Vow, whatever light may shine,
No man on your face shall see
Any grief for change on mine.

Yet the sin is on us both —
Time to dance is not to woo —
Wooer light makes fickle troth —
Scorn of me recoils on you !

Learn to win a lady’s faith
Nobly, as the thing is high ;
Bravely, as for life and death —
With a loyal gravity.

Lead her from the festive boards,
Point her to the starry skies,
Guard her, by your truthful words,
Pure from courtship’s flatteries.

By your truth she shall be true —
Ever true, as wives of yore —
And her Yes, once said to you,
SHALL be Yes for evermore. 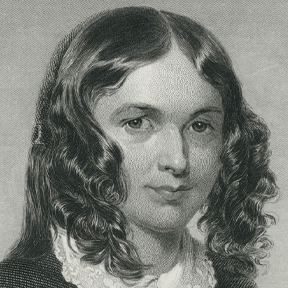 Elizabeth Barrett Browning (1806 – 1861) was an English poet of the Victorian era. Born in County Durham, the eldest of 12 children, Elizabeth Barrett wrote poetry from about the age of six. At 15 she became ill, suffering intense head and spinal pain for the rest of her life. Later in life she also developed lung problems, possibly tuberculosis.

Her first adult collection of poems was published in 1838 and she wrote prolifically between 1841 and 1844, producing poetry, translation and prose. She campaigned for the abolition of slavery and her work helped influence reform in the child labour legislation. Her prolific output made her a rival to Tennyson as a candidate for poet laureate on the death of Wordsworth. Elizabeth's volume Poems (1844) brought her great success, attracting the admiration of the writer Robert Browning. Their correspondence, courtship and marriage were carried out in secret, for fear of her father's disapproval. Following the wedding she was indeed disinherited by her father. The couple moved to Italy in 1846, where she would live for the rest of her life.
X
X