Often rebuked, yet always back returning

To those first feelings that were born with me,
And leaving busy chase of wealth and learning

For idle dreams of things which cannot be:

To-day, I will seek not the shadowy region;

Bring the unreal world too strangely near.

I’ll walk, but not in old heroic traces,

And not in paths of high morality,
And not among the half-distinguished faces,

The clouded forms of long-past history.

I’ll walk where my own nature would be leading:

It vexes me to choose another guide:
Where the gray flocks in ferny glens are feeding;

Where the wild wind blows on the mountain side.

What have those lonely mountains worth revealing?

More glory and more grief than I can tell:
The earth that wakes one human heart to feeling

Can centre both the worlds of Heaven and Hell. 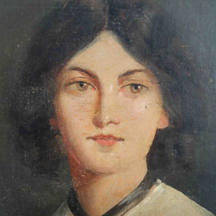 Emily Brontë was an English novelist and poet who is best known for her only novel, 'Wuthering Heights', now considered a classic of English literature. She also published a book of poetry with her sisters Charlotte and Anne titled Poems by Currer, Ellis and Acton Bell with her own poems finding regard as poetic genius. Emily was the second-youngest of the four surviving Brontë siblings, between the youngest Anne and her brother Branwell. She published under the pen name Ellis Bell.
X
X