I’m some pigeon, made by the same man
in shabby bus stations across the country:
Cork and Letterkenny; Derry and Dublin,
a few euros shy of the next departure.

Wherever he’s going, there’s his brother
in bad shape after a road traffic collision,
usually in A&E and unresponsive often
not expected to make it through the night.

What can I do but hear him out?
The café’s closed today and for ever;
the coffee machine cappuccino
is a consommé of dust and hard water.

We’re all past our glory.
A busted brother in every other city summons
someone to his deathbed to say sorry
for some upping of anchor and drifting apart.

But it’s never abandonment, not quite,
just time’s taking on a different music;
deltas, lemon groves, paddy fields, the world
framed by the windows of high-speed trains.

The second hand harries the hour hand:
buses glide like currency from the depot
where I fish in my pocket to offer this man
my sympathies, my smithereens of pelvis. 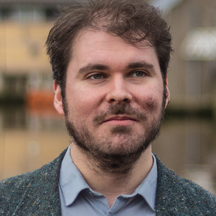 Stephen Sexton’s first book, 'If All the World and Love Were Young' was the winner of the Forward Prize for Best First Collection in 2019. He was awarded the E.M. Forster Award from the American Academy of Arts and Letters and the Rooney Prize for Irish Literature in 2020. A second book, 'Cheryl’s Destinies' will be published in 2021.
X
X