You feel it first
as an itch in the teeth, a gnarl
of nerves coiled too tight.
Some taut aperture sliding open
between the heart and gut.
Precautions must be taken.

Do not enjoy too much
the quick grey jolt of hare, the split-crate thrill
of punctured appleskin.
High lonely places, wind,
the supple creak
of oiled leather. Woods

are of course best avoided.
Copses, spinneys, anywhere,
in fact, where the strong-sweet bulk of horse chestnut
crowds too close, where you can raise
the wet note of fresh-churned earth
by digging in the nails. Rivers

are not to be trusted. They know too much.
They nuzzle the base of cliffs and snout
at kitchen doors. They learn
from the granite of the hills, the pulp
of slick black roots and lovely braids
unwinding in the weeds. The moon

may be looked at in moderation.
But don’t let it give you any ideas.

Fill your house with mirrors. Watch the clock.
Speak often. Do not feel
you are safe in the city: there’s another
under this one. Stop your ears
to curlews, vixens, hounds, they’ve tales to tell

if you’ve the ears. And you’ve no idea
what it is to have ears like mine. 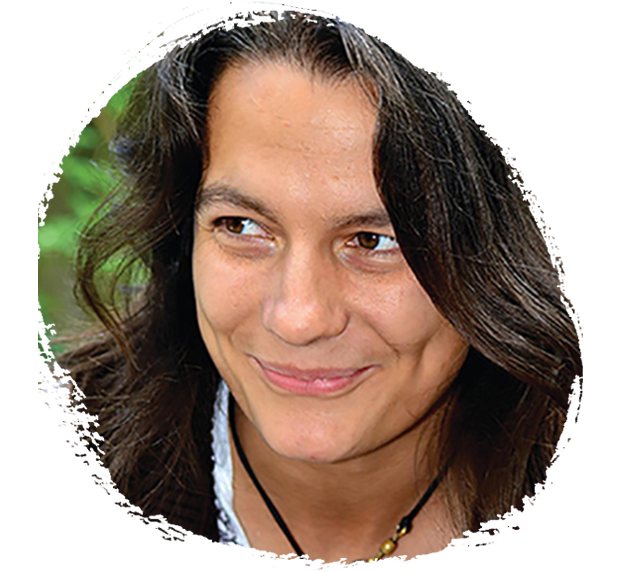 Abigail Parry’s poems have been set to music, translated
into Spanish and Japanese, and tipped onto London from
a helicopter. Her poems for children have appeared in
anthologies of monsters and aliens, and she once dressed up
as six different Aztec gods for one frenetic poetry reading.
She has won a number of prizes and awards for her work,
including the Ballymaloe Prize, the Troubadour Prize and an
Eric Gregory Award.
X