follows in the traditional vein of questioning when one
encounters a person or persons they perceive to be other.
The famous public autopsy, at a dinner party, art gallery,
gymnasium or local bakery. Three words light as a baby’s
finger. But where really? The taxonomy of difference, along
with the need or entitlement to ask so politely, with one
hand resting on the elbow, displaying caution, not wanting
to infer, with emphasis on assume, as in to avoid causing
offence, becoming more scrutinized, every feature up
against the light, your body under their knife, the question
again, so as to deduce, so as to allow the remarkable recalling
of definitive histories, Ibn Khaldun, Mansa Musa, Phillis
Wheatley & Al Afghani, your people, as in extraordinary,
as in don’t take this the wrong way, as in don’t take this to
heart, but it’s all so fascinating, an appreciation if you will,
to announce so subtly, without hubris, the panoply of books
read, on the way we eat & live & love & bury our dead,
& really it’s all just so interesting, as if interest were a
desperate thing scurrying across a mass grave, an artefact
snatched from an old warrior’s hand, neat wall text in a city
museum, to cast iron eyes over, incredulity, you don’t look
like, the aquiline nose was the giveaway, skin thicker than
animal sex that never cracks under god. All those nuances
bloating the unfished ghosts of the sea, & all that hair, is
that natural? Is that yours? Is it real? To touch what I own.
Take what I see. There’s a reason why my daddy told me
to keep a stone between my fists when I fight & really it’s
all too complicated & everything’s already been said much
better by people who had it much worse, but look, is this
your attempt to bid me farewell in my tongue? Are you
here to help carry the burden of my name? Are your hands
strong enough to lug it? We all know the stuck fishbone
never meant any harm. Is that your hand still on my elbow?

© Anthony Anaxagorou, from After the Formalities (Penned in the Margins, £9.99) 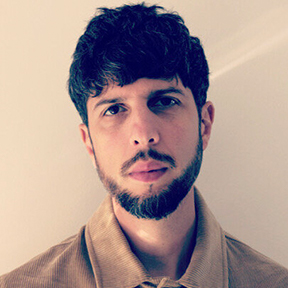 Anthony Anaxagorou is a British-born Cypriot poet, fiction writer, essayist, publisher and poetry educator. His poetry has been published in POETRY, The Poetry Review, Poetry London, New Statesman, Granta, and elsewhere. His work has also appeared on BBC Newsnight, BBC Radio 4, ITV, Vice UK, Channel 4 and Sky Arts. His second collection After the Formalities published with Penned in the Margins is a Poetry Book Society Recommendation and was shortlisted for the 2019 T.S Eliot Prize. It was also a Telegraph and Guardian poetry book of the year.
X
X