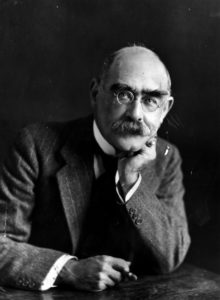 As a trained journalist with a powerful imagination, Kipling was much exercised by the nature of truth. Having reported from India and observed the machinations of British politics, he was fully aware that truth was an elusive beast and people in all walks of life lied through their teeth. He made this clear in two of his best known verses – ‘-If’ and ‘Epitaphs of the War’. The first, often described as Britain’s favourite poem, lists among the qualities of its stoic hero:

If you can wait and not be tired by waiting,

Or being lied about, don’t deal in lies,

While the latter railed against ‘A Dead Statesman’ who admits he ‘lied to please the mob’. But:

Now all my lies are proved untrue

And I must face the men I slew.

What tale shall serve me here among

Mine angry and defrauded young.

Kipling was damning about such mendacity in public affairs, but he admitted that, in fiction, the rules are different. He addressed this in his 1892 story ‘A Matter of Fact’, where three journalists on a voyage home from South Africa come across two fabulous sea serpents during a storm, but decide that, as their story is so unlikely, no one will believe and they had best tell it as fiction, or as one of them puts it, as a lie.

From a different perspective, Kipling admitted that often a writer is forced to dissimulate – not just to deliver a message, but also to get it heard and appreciated. This was the theme of his 1917 poem ‘The Fabulists’:

When all the world would keep a matter hid

Since truth is seldom friend to any crowd

Men write in fable, as old Aesop did,

Jesting at that which none will name aloud.

And this they needs must do, or it will fall

Unless they please they are not heard at all.

But this approach had its flaws. At the time Kipling was thinking hard about how to portray the horrors of war. Two years earlier he had lost his beloved son John at the Battle of Loos, and he was starting to channel his grief into a meticulously researched two volume history of John’s regiment, the Irish Guards.

This penance was hard for the grieving Kipling who, even with his journalist’s training, got bogged down detailing every bloody assault on the Western front.

Shortly after finishing that book, he embarked on ‘Debits and Credits’, which treated the war and its aftermath in a series of short stories. One was accompanied by a poem, ‘A Legend of Truth’, which looked back to his experience with the Guards history. In this he again contemplated the relationship between fiction and truth. It initially seemed that the ugliness of war needed to be addressed by truth, or fact. But when it came down it, he realised that truth (here given a feminine gender) was not up to the task.

She called for proof. It came. The dossiers grew.
She marked them, first, “Return. This can’t be true.”
Then, underneath the cold official word:
“This is not really half of what occurred.”

She faced herself at last, the story runs,
And telegraphed her sister: “Come at once.
Facts out of hand. Unable overtake
Without your aid. Come back for Truth’s own sake!
Co-equal rank and powers if you agree.
They need us both, but you far more than me!”

(Her sister in this instance was, of course, fiction.)

So fiction and truth need to work together – even though Kipling himself probably had his favourite. Shortly before ‘Debits and Credits’ was published in 1926, he gave a talk entitled simply ‘Fiction’ to the Royal Society of Literature. Perhaps pandering to his audience, he commented: ‘Yet, at least, the art that I follow is not an unworthy one. For Fiction is Truth’s elder sister. Obviously. No one in the world knew what truth was till someone had told a story. So it is the oldest of the arts, the mother of history, biography, philosophy….. and, of course, of politics.’ 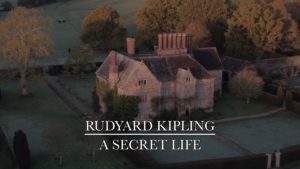