Liv Torc, #BBCLocalPoet 2019 for BBC Radio Somerset, asked her friends to tell her how they were feeling, in the form of a haiku. Her invention, the Haiflu, has inspired thousands of witty, moving takes on the lockdown experience – and now you can join in too: just tag your creations #haiflu so we can see them. 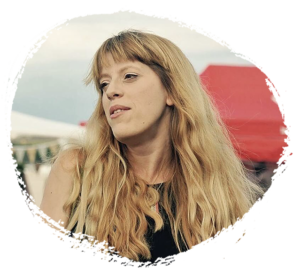 In the first week of lockdown, amidst all the madness and silence, all my friends, including many writers, were feeling unable to write. No one could fix on an emotion long enough to pin it to the page and everything was changing so quickly ideas popped like bubbles before they reached the ceiling.

So, I hit upon the idea of asking people to take an emotional snapshot. To write a haiku – or  ‘haiflu’ – about how they were feeling and what they were up to. I set the challenge on my Facebook page, asking everyone to tell me ‘how they are doing’ in 5,7,5 syllables, because a few words were all we had. I didn’t want to give people space to talk themselves into knots.

About a hundred haiflu were posted in two days and because they were both witty and moving, and revealed so much, I decided to put them into a little poetry film. I also needed visuals that were copyright free and in keeping with the theme. So I asked friends to send me their lockdown photos as well, taken from their windows and walks. Again, people didn’t let me down. I got dozens of stunners.

I think people leapt on it because it was a simple manageable creative challenge that anyone could do.

I made a big group poem out of the haiflu collection, choosing ones which best represented the first week of lockdown, matching each Haiflu with a photo with some photoshop / iMovie magic. Deliberately, I didn’t match anyone’s haiflu to their photo, even when one person provided me with both: I wanted to get away from the obvious and create an art piece as a whole journey that felt more collaborative.

Special thanks to Richard Monks who composed the music in a 5,7,5 time signature: he did an amazing job.

I stayed up until 2am on Saturday night making the film until my legs got so cold in my pjs and I was shivering too much to work the mouse.

And here’s the film: a contrast between the land awakening to spring and the unfolding crisis, the lives behind our windows and the views through them.

So many people contributed in that first week, and I am only sorry I could not fit every Haiflu and photo in the film, as I enjoyed them all – and hope you do too. You can make your own Haiflu for sharing on Twitter over the next month: text on a picture always works best if you place it in a clear space (eg sky), use a simple sans serif font (eg Calibri, Ariel, Helvetica or Avenir) and keep your image around 600 x 340 pxl. Most of the pictures I was sent were 1 mb in size, no bigger.

If you tag the image #haiflu, then the folk at Forward Arts Foundation (which runs National Poetry Day) will look out for the ones that speak best to the moment. Don’t be afraid to offer unlikely and surprising combinations of words and images: there’s art in the match-making, as much as in the writing. I hope you enjoy the challenge – and look forward to seeing what you come up with!

I put out a second haiflu film on Sunday 5 April and now the two films have been seen by over 4,000 people online. “Haiflu” has been named word of the week in The Times and Sunday Times. I’m glad it has been so popular with the online community, so poignant and collaboratively exciting. National Poetry Day and Forward Arts Foundation, who have got behind me to support the project as it develops, have ensured their 13,000 strong mailing list is on board too.

Together, the #haiflu poems and photographs tell a bigger story: the story that none of us can tell alone right now.

One contributor, South West poet Susan Taylor, said “The 5-7-5 form causes us to unfold and reveal inner perspectives. I love the way the photos capture a new angle on each little poem and the music leads us tenderly through each image. This is more than marking time – this is releasing a cycle of unity, as we’re all obliged to rearrange our outlook on the world – having to stay away from each other, we can still, paradoxically, come close to each other’s truth.”

That’s why I made it. Everyone is struggling to be creative because things are moving too fast to pin down, and this is so new and shocking and strange. Sustained work is hard, but a haiku and a photo? That’s manageable. We can all do one of those.

Each film takes me about a day to make, so I am applying for funding to develop this project as a historic and artistic record, with a new film every week to show the changing emotional and political landscape. I want to expand the contributor list to include people from all over the world, of all ages and diversities. This will give the films a much broader picture, and also show our commonality.

So please, if you are feeling emotionally or creatively stuck write a haiflu, take a photo, post both on line with the #haiflu tag and join the movement. And if you are involved with any Trusts and Foundations or organisations that seek to know more about supporting this initiative, get in touch via Forward Arts Foundation.