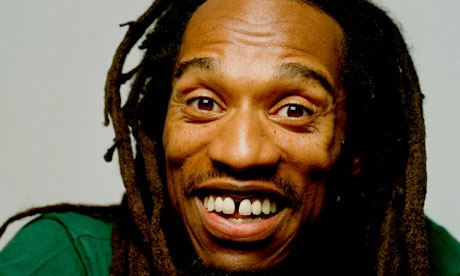 Benjamin Zephaniah has been a supporter of and advocate for National Poetry Day since it began in 1994. But his relationship with poetry goes back far further than that. Between filming commitments for a new poetry-based TV show (more to be announced on that shortly) and work surrounding the publication of his latest novel, Windrush Child, a YA title from Scholastic Books, Professor Zephaniah told us how discovering poetry probably saved his life and why you should #ShareAPoem this National Poetry Day.

Q: What does poetry mean to you?

So many things. Poetry as something I read is one thing, because I usually find a place and a moment to just sit down and absorb something. I don’t even know what it is yet until I read it. I’m just spending time with someone’s else’s views on the world.

When I go out to listen to poetry, that’s poetry in a different mode. I want somebody to excite me with their performance, with the way they move round the stage and the story they tell me. And then I could say, without sounding too dramatic, that poetry saved my life, because I was involved in crime.

I wasn’t a very nice person and found a way of being creative and expressing myself which wasn’t about robbing people or being bad and wanting to tear down police stations. Sometimes I feel like that still, but I can express it through poetry. I don’t know why I hesitate to say this; it’s absolutely true. I am pretty sure that without poetry I probably would have done a lot longer in prison.

Q: Do you think it was important that you discovered poetry as a young man?

Yes. If I’d have discovered it as an older man, it probably would have been after a few prison sentences. Discovering it as a young person meant I was able to change my life at quite a young age.

I remember doing an interview once and one of the first things the interviewer said to me was, ‘you’re so young for a poet’. Back in the seventies, poets were old, so yes, it definitely turned my life around – saved my life possibly.

I used to visit, and I still do sometimes visit prisons. And, one of the most moving things I’ve done when it comes to visiting prisons is performing from one of the very cells that I was locked in, standing in front of it and doing a talk to the prisoners. When I go into prisons sometimes, I meet people I knew when I was in prison. I knew them when they were 14, 15, 16, 17, 18. They’re 50 or 60 now and they’re still in prison.

Q: Why does poetry matter?

Because essentially poetry that you write for yourself is unmediated. You are writing it for yourself. You know, you can write your poetry. This is what I tell people who think, ‘I’m not going to be a Benjamin Zephaniah or a Hollie McNish’ – I say you can still write poems and just put them in your drawer or whatever, it doesn’t matter. The process of writing down your thoughts and getting that stuff out can help you, and that’s all you need to do.

If you want to put your poetry in the public domain, that’s something slightly different. It matters because somebody’s putting down their thoughts and their honest views on the world and observations on the world. If you put it in the public domain, it’s important because it’s me and you, whether I wrote the poem and you read it, or you write a poem and I read it. I’m reading your thoughts.

I can go to some little village in Pakistan and see a book of poetry on a woman’s shelf, and she’ll say: ‘Oh, I’ve been reading this poet from England, and I connect with her’. This woman is never going to come to England. The poet in England is writing from an English perspective, but the woman in Pakistan is thinking: ‘Oh, I feel that’. It’s a different cultural context, but I see what makes us human, what connects us. That’s an amazing thing, and that’s why, or it’s partly why there are now loads of international poetry festivals and literature festivals, because people just want to hear people speaking their truth.

At a time when people can get news from all over the world, there’s nothing like getting a person in front of people – he may not be dressed very well, a little bit nervous but just speaking that truth. It’s really an amazing thing I think.

There was a time when a record company and a book company tried to manufacture a poet and it failed ‘cause the people that listen to poetry see through it. They want honesty. They don’t care if you’re black, white, gay, straight, from Birmingham or Newcastle – it’s about ‘what is your truth; what have you got to tell me?’

Not long ago I was opening a library and alongside me was the local MP who gave this big long speech. I just got up and talked about not being able to read and going into a library cause the library was my little university. And when I finished, the politician said to me, ‘that’s amazing – how did you do that without any notes?’ It was ‘cause I was speaking my truth.

Well, it’s interesting. I wonder what would’ve happened if this was 20, 30 years ago without the internet. Maybe a lot of people would have been writing poetry, but it would have stayed in their bedroom drawer. I think the thing is now people can write a poem and get it into the public domain really quickly. That makes a difference.

Q: Tell us about your relationship with National Poetry Day

Q: Why do you think it’s important that poetry reaches new audiences?

I’m smiling cause I’m thinking of a boy locally – I live out in Lincolnshire and people say it’s a bit of a cultural vacuum, but there’s a young boy around here who has a lot of anxiety and other mental health issues. He uses poetry to kind of steady himself and he’s always organising poetry readings. I wish he was here to answer that question because I don’t know how he does it round here. A lot of people think people that live in the countryside are all rich but rural poverty is also quite bad.

When you’ve got a teenager here that misses the last bus, they really miss the last bus. When it goes dark here it really goes dark. And I’m not pitting one against the other, but when people have mental health problems round here, it can be really, really lonely. So when I see what this guy is doing, I really, really admire him and if he was here I’d get him to answer that question cause he would know more about it than me. But I see him using poetry in a way to give people a voice that would never normally be given a voice, to put people on stage that would never normally be on the stage.

And I know when I listen to him and read his poetry and other people that are like him – and I know from personal experience as well so it’s not just theory – that they’ll speak about things that you won’t find them talking about with their therapist. It’s also true about some rap. These rap guys, you might say they’ve got a big front, but actually, if you listen to what they say within the rap, you get deep into certain problems they have, which they won’t share in any other way.

A lot of young people in these rural places do feel left out. They’re just not on the map. A few years ago some organisation sent a lady into rural Lincolnshire to get young people involved in the arts. I know two things about it. She was quite well paid, and it failed. They just didn’t buy into somebody coming in from the outside, and the kind of arts she wanted to involve them in just weren’t relevant to them.

Spoken word, poetry, music – when I talk about poetry, I also mention music because I’m from the oral tradition and we don’t really see that much difference between them. In some African languages and Middle Eastern languages, the word for them is the same. These are things that really connect with people and they find accessible. You have to find out how they want to express themselves. What do they want to say about the world? How do they feel?

Q: What is National Poetry Day about to you?

Q: National Poetry Day marks the start of Black History Month. What does that mean to you?

But I can understand the need for it, and I know why it was started, to get people to understand things about black history. The Black Lives Matter movement has really shaken up a lot of people and I don’t actually know if a lot of people realise about the Black Writers Guild that we’re organising now.

One of the things we did after George Floyd – out of frustration and looking at the lack of black writers published – is we formed kind of like a union. It’s not fully established yet but an open letter was in all the newspapers and was sent to every publisher in the country and almost every publisher replied back.

There’s a list of demands – very reasonable demands, but it’s all about being sick and tired of being marginalised. We had one woman who works for a major publisher – a black woman, and she said she’d been working there some years and had never published a black writer. I didn’t realise that in the publishing industry, when you write something you have to say what is this comparable to, and so much of new black writing is not comparable to anything.

Whatever people do though, it has to be sustained. They can’t just do it because it’s this moment. That’s the important thing for me. I don’t think that all monuments should be torn down, but I think they all should be put in a realistic context, and in an honest context.

Q: Why should people get involved in National Poetry Day?

I’d say to them, come and speak to the world, you know, come on!

Poetry is a place where you can express yourself in so many ways. If you want to do nonsense, I’ll turn you on to books by Mervyn Peake, and Spike Milligan – I absolutely love his work. So we can go from nonsense to wordplay, to poems that politicians have to take notice of. I tell children that. And when they ask me about the rules, I say that when people break the rules in a really creative way, they create a new form of poetry.

So yeah – share a poem! Even if you’re not ready to write how you feel, find a poem that says how you feel, and that can be happy or sad or whatever, but share it.

HEAR BENJAMIN ZEPHANIAH ON BBC NEWSROUND – “Be your own poet”