Home › Blog › Side by side with our selves

Side by side with our selves 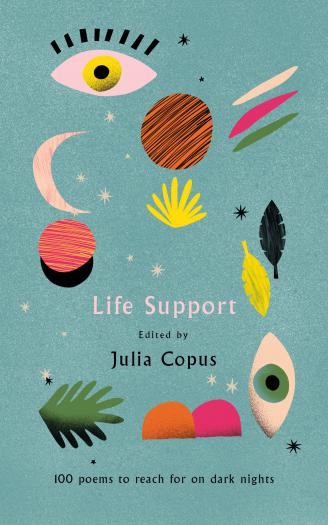 Poet Julia Copus was asked to find 100 poems written in English throughout the ages that would somehow comfort their readers. Here’s what she discovered about herself, about others and the “little things around” in the process of creating her great anthology Life Support: 100 Poems to Reach for on Dark Nights (Head of Zeus, £9.99).

Two years ago, the publishing house Head of Zeus asked me to put together an anthology of 100 poems in English, under the title Life Support. It seemed like a dream commission. Then came the hitch: they wanted to run the book under their new lifestyle imprint, Anima. The idea of a poetry anthology with a ‘therapeutic’ slant didn’t sit easily with me. Still, I figured that such considerations needn’t impinge on the quality of poems I chose; the rest could be taken care of by some careful structuring. As I began, I found myself thinking of moments in my own life when poetry had woken me out of stagnancy or given me strength during times of desperation. Australian poet Les Murray experienced a similar change of attitude when he fell ill with depression: “I’d disapproved of using poetry as personal therapy, but the Black Dog taught me better”.

I was so busy that summer that I neglected keeping in touch with friends and family. I felt I had no choice but to immerse myself in work, locking myself away. At about the halfway point, I noticed something strange happening. The experience of reading through thousands of poems in one go – of hearing all those voices, some contemporary, some ancient but all of them living, coming to life as they journeyed from eye to ear to mind – induced in me an altered state in which, though alone, I became more than usually aware of my interconnectedness with others.

Talking to passers-by, on my government-sanctioned daily walk, I’ve discovered that the Covid-19 lockdown has produced a similar effect: apartness has led, in spite of itself, to a greater sense of togetherness. Difficult or frightening events can do this. They make us more aware of bonds because they occasion in us the need to “look about and find a sheltering place”, as happens in John Clare’s sonnet ‘Sudden Shower’, which manages to be both frightening and consoling at once. We are living through a time when, as Clare puts it, “The little things around, like you and I / Are hurrying through the grass to shun the shower”. The greater the crisis – and therefore the more vulnerable we are – the greater the sense of connection we experience.

The lockdown has disrupted our normal pattern of life in a way that forces us to step outside habitual ways of thinking. The sensation, for me, is of standing alongside my normal self. Having lost a relative to the pandemic in the second week of the lockdown, and with two close family members now on the ‘shielded patients’ list, I was troubled by comments that the sunny weather made isolation measures feel like some sort of extended vacation. But in fact ‘vacation’ may be just the right word. From the Latin vacare – to be empty – it comes from times when Romans would make for the sea in the sweltering heat of summer, leaving their houses empty. For many of us, life as we know it has been vacated; emptied of human presence.

And in such a world, things normally invisible to us are being made visible – sometimes in a literal sense, as witness the recent pictures of wild boar trotting through the streets of Italy or horned Kashmiri goats descending from the Welsh uplands to feast on the gardens of Llandudno. There is a section in Life Support called ‘Visible, Invisible’ which celebrates the power of poetry to reveal those parts of the world – many of them tiny – that are normally hidden in plain sight; unnoticed because of their very familiarity. When Alice Oswald talks of houseflies’ wings as “little more than flakes of dead skin” we recognise at once the truth of the image and thus we are startled out of some of our second-hand, muddled ways of seeing.

Reading a poem too provides – in Robert Frost’s memorable description ­– “a momentary stay against confusion”. Italian writer Primo Levi found that in the midst of the atrocities of Auschwitz he was able to still the confusion by reciting passages from Dante’s Inferno, a poem he hadn’t seen since his school days. Speaking the poem aloud to a friend in the camp granted him, he said, “a respite … a way to find myself”. My grandfather too was, in one respect, saved by words. The youngest of nine children, he was schooled at Spurgeons orphanage in Stockwell where he was sent after his father died. There, he was given the number 41, suffered night terrors and was bullied for, according to his memoir, ‘using long words’. But after leaving the orphanage at fourteen, he continued reading and went on to study at Edinburgh Theological College. At his funeral we sang his setting of a song by Theodore Monad: Grant me now my spirit’s longing: / None of self and all of thee! The right words at the right time can sustain; can sometimes answer the ‘spirit’s longing’ when nothing else can.

If we can see anew, we can also learn to hear anew. One of the first poems I chose for my anthology, Olaf Hauge’s ‘Leaf-huts and Snow-houses’, recreates the magic of makeshift dwellings built by the poet in days when he was small enough “to creep / In and sit / Listening to the rain”. Geophysicists tell us that human-generated seismic ‘noise’ (made by vehicles, industry and even walking) has measurably decreased since isolation measures have been in force, making it easier to detect the aftershocks of earthquakes. London-based poet Charlotte Mew celebrated “everything there is to hear in the heart of hidden things” ­– “because”, she wrote, “in the long, still dusks of Spring / You can hear the whole world whispering”. With our background noise turned down low, we have the opportunity to tune in to those quieter voices and allow them to bring us some of the solace we so badly need at this time. The hope is that we will continue to listen once ‘normal life’ (whatever that might look like) resumes and, in the words of Elizabeth Bishop, “All the untidy activity continues, awful but cheerful”. 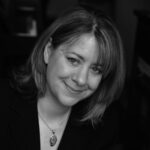 Julia was born in London and now lives in Somerset. She has won First Prize in the National Poetry Competition and the Forward Prize for Best Single Poem of the Year (2010).