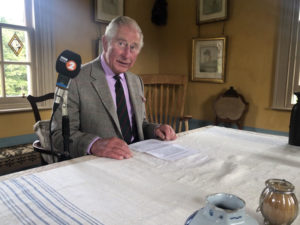 The Prince of Wales marked the 25th anniversary of National Poetry Day by recording a reading of Bernard Levin’s ‘Quoting Shakespeare’.

The composition explores the everyday use of Shakespeare’s phrases. The reading was broadcast on the BBC Radio 2 Breakfast Show on 3rd October, National Poetry Day 2019.

Introducing the piece, The Prince said:

I would like to read what I’ve always thought was something rather special.

The great thing about it, I think, is it reminds us all just how many words and phrases we use in the English language and in general conversation which actually were originally written by Shakespeare.

Listen to His Royal Highness’s reading in full below.