This year, we celebrate the poetry in England and Scotland’s favourite local words through National Poetry Day, which worked with the BBC, Hull City of Culture and 13 poets on the creation of 13 new poems. Each poem riffs on a different dialect word that deserves to be better known outside its area, chosen from nominations by BBC radio listeners across the country.

The final selection was made with the help of lexicographer Eleanor Maier from the Oxford English Dictionary, on the look-out for new definitions and usages to fill the gaps in the Dictionary’s overview of the English language.

The words include cheeselog, nominated by BBC Radio Berkshire listeners, and bobowler from the West Midlands – meaning a woodlouse and large moth, respectively – which have been adopted as the subjects of new poems by Reading-born Hollie McNish and the Black Country’s Liz Berry.

BBC Radio Leeds poet, Vidyan Ravinthiran, will take a poetic walk down a ginnel (alleyway), which is known by BBC Sussex listeners and their poet, James Brookes, as a twitten.

Poet Isaiah Hull has woven all 12 words into a bravura poem-of-poems, commissioned and broadcast as part of the Contains Strong Language festival.

Here’s the Weather, a new poem by BBC Radio Scotland’s Poet in Residence Stuart Paterson contains a flurry of the 700 words nominated by listeners, as well as the word topping the poll – dreich – meaning dreary, damp, misty; while the word cwtch, a hug in Welsh, was chosen by Sophie McKeand, Young People’s Laureate for Wales, for her poem.

Listen to the poems here:

Scotland – Stuart Paterson – A variety of Scots related to weather 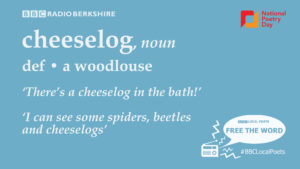 Susannah Herbert, National Poetry Day says: “A poem gives people the freedom to play with words, to rub off the dull tarnish until they’re fresh as new pennies. That’s why the BBC’s push to get poets to celebrate the nation’s favourite local words has struck such a chord with the nation. Everyone who shares a poem, whether in a tweet, a nursery rhyme or a note on the fridge, is pushing back against the deadening regime of prose and striking a blow for the imagination.”

To find out more, read our press release.