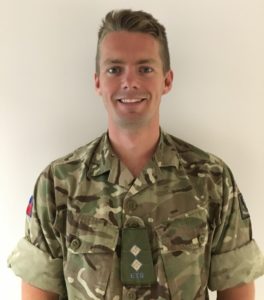 Lieutenant David Boyles discusses how the British Army is increasingly reading poetry to develop the ‘thinking soldier’ comfortable with creative problem solving and ambiguity on the modern battlefield.

For many people, ‘military poetry’ conjures up sepia tone Tommies or National Gallery generals: somewhere between ‘The Charge of the Light Brigade’, Rupert Brooke’s ‘The Soldier’, or a combination of satire in the guise of Wilfred Owen, Siegfried Sassoon, or Private Baldrick’s richly onomatopoeic ‘The German Guns’ from Blackadder Goes Forth.

It is a comfortable, but incomplete, picture.

A large part of military training exists outside comfort zones. When I ask you to picture me standing stock still in three ranks of thirty identical cadets, with a Staff Sergeant singling me out for attention, you instinctively know that I didn’t want my name to be called:

Mr Boyles… [long pause as my stomach tightened] …what did YOU study at university?

I now know that the Staff Sergeant was trying to make me more comfortable speaking in front of others, by selecting a topic I must know something about. In February 2015, it felt like a trap.

Poetry and Poetics, Staff Sergeant. I replied, in what I hoped was a voice befitting a potential officer.

For three whole years? Her exaggerated incredulity caused a few sniggers to break out. Although she didn’t smile, the fact that she tolerated the laughter meant that this was a safe environment to play along.

Well, I expect you’ll be able to recite us some poetry then… Please, go ahead.

I swallowed. Although we’d been in training a month, less than ten percent of the people here knew my first name, let alone my aesthetic preferences. Luckily, I had memorised enough ‘Modern American Poetry’ for my finals at Warwick University that I had a couple of options. I relaxed, cleared my throat, and began:

so much depends
upon

beside the white
chickens

When I finished, the Staff Sergeant only had one comment: Mr Boyles… It doesn’t even rhyme. 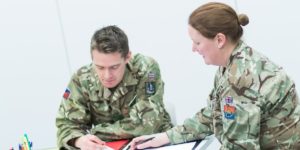 Fast forward three years and now I’m the one trying to warm a group up. In class sizes anywhere from twelve to seventy people with military experience ranging from two weeks to twenty years; that poem, alongside works by Benjamin Zephaniah, William Blake, and Elizabeth Bishop, has become a useful tool to push people outside of their comfort zones:
You have ten minutes to craft a two-minute argument as to why this is the best poem written in the English language. There’ll be a vote. I expect a dramatic reading. I hand out a different poem to each group.

People used to join the British Army to escape the classroom. Perhaps they still do. These days, they’d initially be disappointed. Either way, very few would have expected to be puzzling over where Larkin’s ‘High Windows’ lead, trying to master ‘The Art of Losing’, or interrogating what makes a poem ‘good’ in the first place.

However, as the adage goes, ‘train for certainty, educate for uncertainty’. In an era of contingency operations, where the military simultaneously provides a nuclear deterrent and disaster relief, while training anti-poaching forces in Malawi and guarding the Royal Palaces, soldiers must quickly become comfortable with both variety and ambiguity. Poetry is a great vehicle for this: it is also very cheap.

When something happens that wasn’t in the training manual, they won’t search for inspiration beside the white chickens, but the experience of considering different interpretations, and ultimately deciding on one, should serve them well. This is the job of all soldiers, and all leaders.

With more time, soldiers can begin to use this experience to become more comfortable writing poetry as well as reading it. The military winner of this year’s inaugural British Army Poetry Competition: ‘Writing Armistice’, was Private Thomas Waghorn, only a couple of years out of Phase 1 training himself. This is a good sign for military poetry and leadership in the future.

When ten minutes is up and analysis begins I am consistently surprised by the variety of interpretations of windows, wheelbarrows, and everything in between. Regardless of which poem they started with, the group with the most convincing interpretation or narrative tend to win. There’s something to that, but I won’t spell it out for you.