BBC Local Radio and National Poetry Day have won Silver in the Best Branded content or partnerships category at the 2017 ARIAS – the Audio and Radio Industry Awards – which aims to recognise talent, innovation and excellence across the entire audio and radio industry. 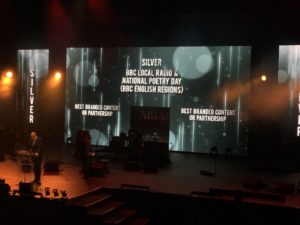 Awarded for their 2016 campaign, BBC Local Radio and National Poetry Day joined forces for the first time last year to celebrate England’s local landmarks in poetry. The 40 stations of BBC Local Radio in England marked National Poetry Day (6 October) by each broadcasting a poem commissioned from 40 #BBClocalpoets in an unprecedented lyrical mapping of the English landscape. Each poet adopted the voice of a characteristic local landmark or mascot nominated by listeners: these ranged from a Lincolnshire sausage (Gemma Baker, BBC Radio Lincolnshire) to the potholes of Britain’s least-appreciated road, the A12, (Luke Wright, BBC Radio Suffolk), via Brighton’s West Pier, Newcastle’s Tyne Bridge and London’s iconic Tube Map. Collectively, these poems documented the distinctiveness of local England with wit, humour and defiantly non-standard accents and dialects.

The judges said “[the partnership demonstrates] what BBC Local Radio can do best: taking a national promotion and providing genuine engagement with the listeners and local community.”

BBC Local Radio partnered with National Poetry Day for a second time in 2017, this time to celebrate England’s local words in poetry. Taking their cue from National Poetry Day’s 2017 theme – Freedom – BBC Local Radio stations across England called on listeners to ‘Free the Word’ by nominating a distinctive local word that deserves to be better known nationally. The final selection was made with the help of lexicographers from the Oxford English Dictionary, on the look out for new definitions and usages to fill the gaps in the dictionary’s overview of the English language. These 12 local words are now the inspiration for 12 new local poems, broadcast across the BBC network on National Poetry Day 2017: among the words selected are cheeselog, meaning a woodlouse (Hollie McNish, BBC Radio Berkshire) and bobowler, a West Midlands’ word for a large moth (Liz Berry, BBC WM).

The Christian O’Connell Breakfast Show with Wickes (Absolute Radio) won Gold in the Best Branded content or partnerships category at the ARIAS and School of Rock (Magic Radio) won Bronze.