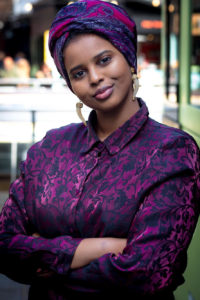 Congratulations to 24-year-old Momtaza Mehri who has been named as London’s new Young People’s Laureate. Momtaza will work with Spread the Word for a year on youth-focused residencies across the capital and will front a tour in six outer London Boroughs: Barking and Dagenham, Brent, Kingston, Bromley, Redbridge and Sutton.

In her new role, she will also co-host a special development project for talented young London poets called The Young People’s PoetryLab

“It’s an unexpected and thrilling feeling being the new Young People’s Laureate for London,” said Momtaza. I want to use this role to amplify the voices of young Londoners and showcase their creative potential. I know they will inspire me as much as I hope to inspire them. I am excited by the possibilities we can imagine together, through and with poetry.”

Rishi Dastidar, Spread the Word’s Chair of Trustees, said: “For young people to have an artist who is an ambassador for them, who brings their concerns, struggles and joys to those in authority, and the wider world, is vital. Becoming Young People’s Laureate is a sign that this is a poet to watch. Momtaza Mehri is an inspired choice. Her poetry is precise and powerful, and rich with images that are haunting. She is not afraid to tackle the biggest of subjects which, combined with her talent, is going to give the role a renewed sense of purpose and visibility.”

Momtaza was selected by a nomination panel including arts bodies, such as The Roundhouse, Apples and Snakes, Barbican, South Bank Centre and the Poetry Society and takes over from outgoing Young People’s Laureate Caleb Femi. The judging panel, featuring poets Jacob Sam-La Rose, Joelle Taylor and Nick Makoha, described the talent level on the Laureate shortlist as exceptionally high.

Joelle Taylor, Young People’s Laureate for London judge, said: “The Young People’s Laureate is both the voice of and advocate for London youth, as well as being an ambassador for global poetry. A dynamic and diverse city demands a poet that can speak for it and help others to find their mouths too – and that is at the heart of why the role was created. Momtaza Mehri brings a rare understanding of transnational cultures that will infuse the role and help create a poetic that is identifiably London.”